The Evzone Tailors of Greece

There are ceremonial guards all over the world, patiently standing watch at this very moment. Of this large cadre, the Evzone Guards of Greece must certainly be some of the most unique. This elite infantry unit of the Greek Army stands guard in front of the Tomb of the Unknown Soldier at the Parliament Building in Athens. The uniforms were made famous by a band of mountain guerrilla fighters in the early 19th Century war when Greece was fighting to send the Ottoman Turks packing. Historically, the members of this unit are seen as heroes for their courage and outrageous guerrilla tactics.
The Uniform:
The skirt / kids has 400 pleats in it, one for every year of the Turkish occupation. The uniforms are made by special craftsmen and takes around 80 days to make, each hand-embroidered. There are several kinds of uniforms. The Evzones waistcoat takes up to one month to sew, and the world famous shoes, or tsarouhi, all made in the tailor's department of the Presidential Guard training camp.
“You need the patience of a donkey to do this job,” says Vangelis Lazos, the master Evzone tailor, as he embroiders a fermeli (waistcoat), the most challenging part of the unit’s uniform. He learned the craft from his father and now teaches younger generations. The felt is so densely embroidered that its “good side” doesn’t show at all and its reverse is full of needle holes. 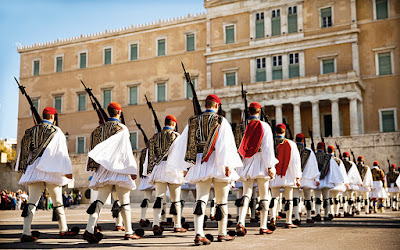 “You can tell a man’s character from the reverse. You’ll spot a nervous type from the stitching,” he says. 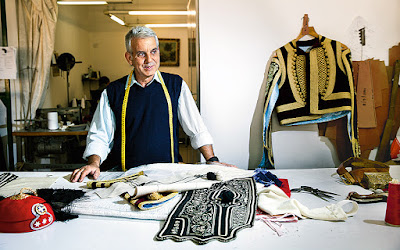 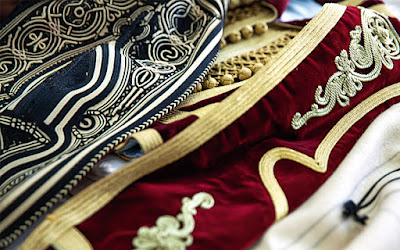 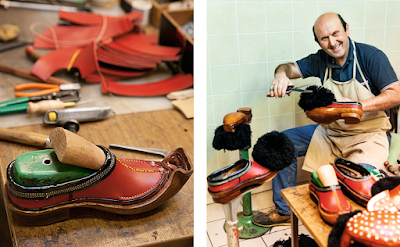 The inimitable master of the legendary tsarouchia – a trademark of Greece around the world – Giorgos Dermatas is just starting to construct a new pair, using nothing but his hands, two small awls and two lasts.
“We get goose bumps when we see the Evzones on their way to the Tomb of the Unknown Soldier. We check their tsarouchia to see if anything needs to be fixed,” he says. 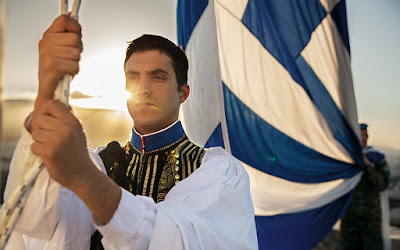 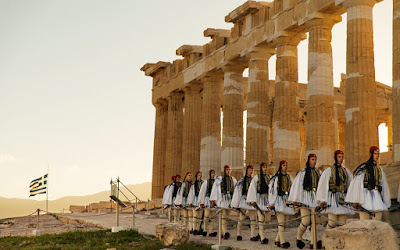 The smallest size they come in is a Greek 44 (9.5 in the UK or 10.5 in the US) and the largest a 53. The process begins with the cutting of the leather, which is then soaked in water to make stitching easier. The soles are made of cowhide though they look like mahogany. The parts are then sewn together with a waxed cord, also handmade using natural beeswax. Each pair requires more than 600 stitches and 100-120 nails are hammered into the soles. After the tsarouchia are painted and polished, the pompon is attached.
Some say Evzones would conceal a blade in the pompons for use during hand-to-hand combat.
“Let’s give this one a haircut,” says Dermatas as he grabs a pair of scissors and starts grooming a pompon.
“The earth trembles,” he says, pounding the shoe to emulate the sharp stamping of the Evzone’s feet as they march.
Article at Greece Is, by Maria Korachai, Photos by Dimitris Vlaikos.
To read more about the Greek Evzones, read this article (link here) about the history of the Presidential Guard.
Labels: ancient greece athens clothes evzone fashion greece greek guards soldiers tailors tradition uniform 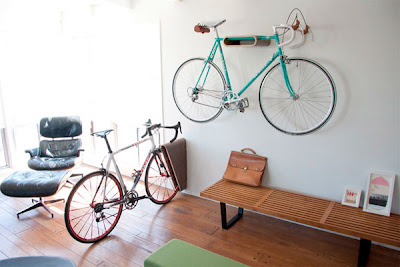 ALPHA
Nicosia, Cyprus
Designer, blogger, maker and curator of LoveFromCyprus e-shop. Plans to take over the world are now in action. Constantly looking for allies.